Gamifying physio through virtual reality makes the fun even more fun, says the co-founder of this Canadian company.

As it stands, physio is “quite boring and boring to do”, in the opinion of Tenzr CEO Gautam Sadarangani. That’s why they turn the experience into a game with their software.

The “gamification” of exercises allows people to compete with their peers to reach the top of a meter while doing their physical therapy exercises for hands, wrists and elbows. This encourages them to do it more often and enjoy it more, says Sadarangani.

They took inspiration from games like Snake and Mario Kart while developing the technology.

This way, physiotherapists can maximize their time by only helping people who really need it, and people who receive remote care can make the most of it.

As people play, they turn their aching limbs into “controllers.”

“You need to move your limb in a clinically accurate movement pattern to progress through the game,” says Sadarangani.

The system consists of two components: a wearable sensor and an iPad.

In Toronto and Vancouver, patients can rent the kit and receive the iPad for about $50.

“We want it to be as transparent as possible and fairly affordable,” he says. 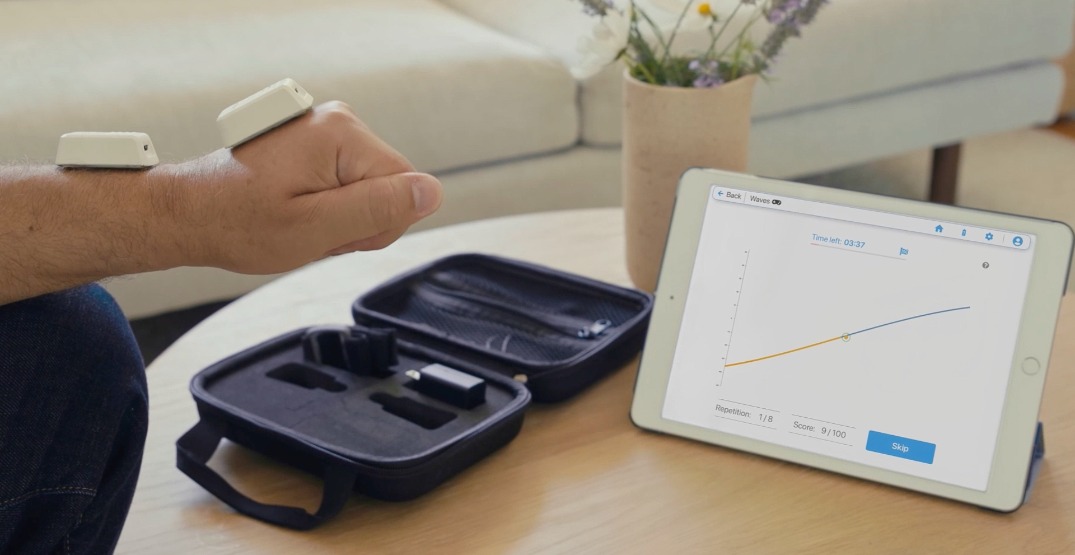 The physiotherapist and the patient decide how long they will need it, but three or four months is the average.

It is possible to “beat” the game, but only by finishing your physio progress.

“One of the things that makes it really rewarding for the patient is that you’re not playing the same game over and over again,” he says.

In the long term, Tenzr plans to continue adding fun and engaging rehabilitation games — potentially including virtual and augmented reality.

“The benefits of it, not just in physical therapy but in general to make games more engaging and immersive, it lends itself very well to that application,” he says.

“There are very good rehabilitation reasons for wanting to include a more immersive experience, including suggestions that help distract from pain and [brain function].”

Going forward, the main challenges would be to make sure it’s easy to use and people are comfortable with headsets.

The technology has come a long way already, but will continue to evolve rapidly in the years to come.